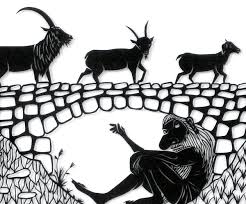 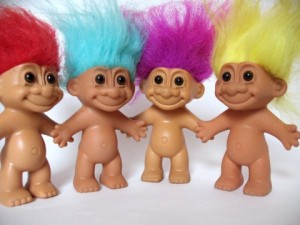 Growing up, I learned about trolls from the story of the Three Billy Goats Gruff.

Oh, and those little weird rubbery dolls with the bizarre hair in the 60’s.

Oh, and fishing with my gramps from a boat.

In the first MOOC, I learned what troll means in the the new millennium.

It “originally meant the act of posting a message in a newsgroup (and later on a blog) that is obviously exaggerating something on a particular topic, hoping to trick a newbie into posting a follow-up article that points out the mistake.

Traditionally “to troll” means to allure, to fish, to entice, or to bait. Internet trolls are people who fish for other people’s confidence and, once found, exploit it.

Trolls vary in nature; here are a few types of online trolls:

You have probably heard various opinions about how to deal with people who write insulting or provocative remarks on various Internet forums. The most common is “Don’t Feed the Trolls”, which says that all the people in the forum should avoid responding to the troll.  From Wikipedia “Media attention in recent years has equated trolling with online harassment” or cyberbullying.

The people who post nasty comments online are likely to have pathological personalities, said a 2014 study from the University of Manitoba. Known as “Internet trolls,” Web users who like to post inflammatory comments, incite arguments, and send insulting tweets are more likely to exhibit Machiavellianism, narcissism, psychopathy, and sadism. Collectively known as the “Dark Tetrad,” these personality traits were shown to be prevalent through surveys designed to understand what makes trolls tick.”

Griefing is another term new to me.  There is a whole page explaining it on the Minecraft Wiki.  On that site, griefing is “the act of irritating and angering people in video games through the use of destruction, construction, or social engineering.” Or, deliberately disturbing or destroying other players’ work without their permission.

A griefer is a player in a multiplayer video game who deliberately irritates and harasses other players within the game, using aspects of the game in unintended ways. A griefer derives pleasure primarily or exclusively from the act of annoying other users, and as such is a particular nuisance in online gaming communities, since griefers often cannot be deterred by penalties related to in-game goals.  From Wikipedia: In Taiwan, griefers are known as “white-eyed”—a metaphor meaning that their eyes have no pupils and so they look without seeing. Behaviors other than griefing which can cause players to be stigmatized as “white-eyed” include cursing, cheating, stealing, and unreasonable killing.

Probably the kindest word in my vernacular to sum up a griefer would be idiot.  Of which I am one, as a newbie to Minecraft.  I have destroyed much, completely unintentionally.  So, I apologize in advance for not having the necessary hand-eye coordination necessary to not be a griefer!  In my case, the destruction is purely accidental.

The Art and Craft of Blogging

The latest news on WordPress.com and the WordPress community.

I'm going on a technology adventure! Let's get global!